An engineer dies and reports to the pearly gates. St. Peter checks his dossier and says, “Ah, you’re an engineer — you’re assigned to hell.”

So the engineer reports to the gates of hell and is let in. Pretty soon, the engineer gets dissatisfied with the level of accommodations and starts designing and building improvements.

After a while, they’ve got air-conditioning and flush toilets, escalators, elevators and so on … and the engineer is a pretty popular guy.

One day, God calls Satan on the telephone.

“So, how’s it going down there in hell?” God says.

“Hey, things are going great. We’ve got air-conditioning and flush toilets and escalators. There’s no telling what our engineer is going to come up with next!” Satan says.

“What? You’ve got an engineer? That’s a mistake — he should have never gotten down there. Send him back immediately!” God says.

“No way! I like having an engineer on the staff — I’m keeping him!” Satan says.

“Yeah, right. And just where are you going to get a lawyer?“ 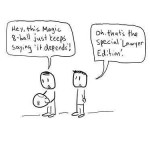